cw: trauma / suicide mentions. they're literally only mentioned offhandedly as examples etc, nothing is explicit.

Sometime ago, I shared a post from someone that said 'hyper sexual males are a red flag'. A friend replied to my share and asked, "isn't hypersexuality due to trauma?". All this was in the comments of the OP, so I don't blame my friend for not checking, but the OP of the post explained that they meant hyper as in overly/super and didn't know of the condition. They were really only talking about men they've met who were extremely sexual in every conversation no matter how uncomfortable others (usually, women) were.

But either way, something about this made me think to myself and realize… if you were the OP, or been in situations like OP had, would it have really mattered to you if the guy being wildly inappropriate were hyper sexual or hypersexual? Is a guy who kills women different than a guy with trauma who kills women? I can get not wanting to stigmatize people with a certain illness! But really, I think some people assume their trauma absolves them of either learning to manage symptoms or excludes them of ever being a bad person.

Like, I get it. I was a Tumblr girl. Not someone who liked Doctor Who or anything, I just reblogged pastel goth clothes and cutesy anime gifs. Then at some point I became a kinnie, then an Undertale liker, and yadda yadda. Anyway. I'm saying all this to say that I've been on tumblr a LONG time, literally 10 years at this point. Any crazy Tumblr story like the bone stealing witch or someone pretending to be a woman with HIV just to write a fanfic, I've been there for. And unfortunately, I was there when the mental health side of Tumblr (and tbh, Tumblr as a whole) was EXTREMELY anti-recovery.

I'm talking about nobody wanted to get better. So many posts went around about being trash (because it was hashtag relatable ! XD) went around daily. And specifically mental health posts were just SO damn bad because no one wanted to take responsibility for themselves. Oh, you didn't spend every waking minute talking to and reassuring someone with BPD? Ableism! Getting help and finding coping mechanisms? What's that?

Genuinely wish it was hyperbole. These types of posts had thousands of notes.

And I believed in a lot of those posts! I thought everyone was just supposed to deal with my bull, I guess as teenagers tend to do. My trauma and actions from trauma were simply everyone else's to navigate around. But after a while, my actions caught up to me! Surprise, no one wanted to deal with me not managing my symptoms when they could just.. not. To recover, I took an entire year off Tumblr because I couldn't deal with the person I'd become, and the environment of Tumblr would only keep me on that path.

And I see that anti-recovery/pro-Everyone Should Accommodate You No Matter What ! nonsense pop up too often for my liking on there now. And whatever Twitter does, Tiktok does 17.45x worse. I can only imagine the 2014 level Tumblr discourse they got going on on "mental healthtok" or whatever.

It's just.. really sad to see this resurgence of people not wanting to take responsibility for their trauma. The internet always leans too much to either side, first it was 'anyone with any disorder ever is CRAZY and INSANE', then we got mental health education, and now it's 'anything the mentally ill do is fine because they had trauma once, actually'.

Again, I sympathize. (Empathize?) Trauma is something that happens to you, something that you most likely did not deserve. So, if someone goes "well, dudes who make everything about sex are red flags", someone else might go "well I make everything about sex because of trauma! trauma that happened to me without my consent! how could anything i do stemming from something i didnt ask for possibly be a red flag? Its not like I asked to be this way! do you hate people with trauma??????"

To that I say, in my most genuine and nice and loving way: everything's not about you.

There are other people in this world, with their own traumas, that deserve to feel safe as well. No one wants to hear it, but the product(s) of your trauma (aka, how you are treating others because of it) is your responsibility. I'm genuinely sorry. It shouldn't be your burden to bear, but it is. Trauma is an explanation for grace and understanding (which people should give, as mistakes happen), but it can't be an excuse.

Saying this in 2015 Tumblr or present day Twitter would get you put on a hitlist fr.

But them's the breaks!

I don't really know how to wrap this up besides this tweet I found randomly during the weeks I was writing this. made me giggle LOL 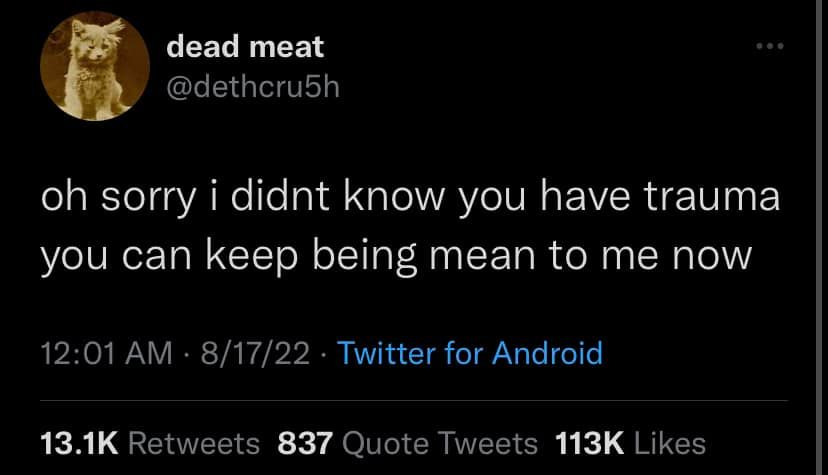