i do NOT consume media for whatever reason. i never like things, i dont watch TV, i'll go back to something i like 1000 times before seeking something new. so! i'm attempting to change that!

ive sort of recently gotten into watching a very small select of lets players when im drawing, so if i can do that, i can take my time to watch a movie or some series instead!

my rating system will be:
🛑: HELL NAWL, TERRIBLE ASS SHOW
👎🏽: wasn't for me really
🤔: not sure how to feel about it.. twas aight..
👍🏽: i really liked this!
💥: TALENTED, BRILLIANT, SHOWSTOPPING, NEVER BEEN DONE BEFORE 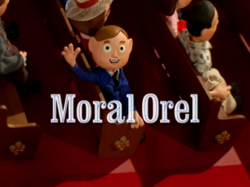 a friend of mine told me this was one of their favorite cartoons ever and i thought they were crazy, ngl. but after finishing it... i am extremely surprised i like it a lot.

well, for one, NO ONE GAVE ME ANY TRIGGER WARNINGS FOR THIS LOL but thankfully im not triggered by anything so it didnt matter to much. but BOY does it have way more than your average #edgy adult swim cartoon (but in a good way!)

the first season almost lost me, ngl. it was hard to binge since the episodes were so.. formulaic? and also all i could hear was sandy cheeks instead of orel LOL

but after we got out of caring only abt orel's hijinks and learned abt the townsfolk.. i loved it! orel reminds me so much of spongebob, hes so cute and happy go lucky, i love watching him. SPOILERY TERRITORY but it hurt me so much to see him realize life Isn't that great all the time and the people he idolizes suck too.

the ending was just really nice as well. it could have easily went the other way, where he turns his back on everything, but he didnt, and i think thats way more satisfying !

hopefully sometime i'll get to drawing some art for this show, the s2 finale and clay's voice actor in general rly did the damn thing fr!!!!!